Garp Stavo Sauce is a cosplayer who makes all his own props and has a true passion for the hobby. Although his cosplays vary from video games to anime to movies, the one thing they all have in common is that their attention to detail makes them all look awesome. I recently sat down with Garp to talk about League of Legends and what it’s like being a male cosplayer. 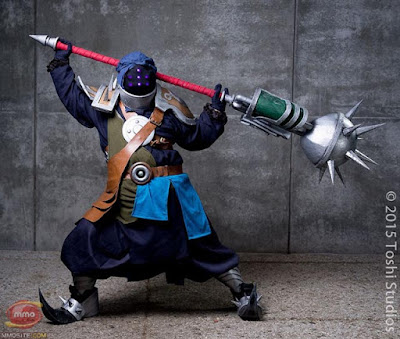 I have been cosplaying for a little over five years.

I first decided to cosplay for the first time when I attended my first Anime Expo five years ago since it looked like fun when I went to BlizzCon and Comic-Con the year before. I decided to cosplay Mario from Nintendo's Super Mario Bros. which was a lot of fun. I had a dad ask me to put my foot on top of his five year-old son like if he was a Goomba. I was a little nervous about it but I still did it, hahaha.

What are some the favorite characters you've cosplayed?

Here are some of favorite characters I've cosplayed:

Jax from League of Legends, of course. I really love the Temple skin due to its Asian design, but I also have a Nemesis Jax skin and SKT Jax skin in my cosplay arsenal.

Xiahou Yuan from Koei Tecmo's Dynasty Warriors games. He is known as the "The Happy General” and I had always admired the art of the Koei games in the past, but I never actually played much of them until I picked up the PlayStation 4 version of Dynasty Warriors 8.

Monkey D. Garp Vice Admiral of the Marine, from the Manga/Anime series One Piece. This is one of my favorite series’ to the point where I have become kinda addicted to it. I've cosplayed four different versions of Garp since I started cosplaying as well as many other characters from the series.

The best one for me to take to American Con and is also very enjoyable to wear is my Knight of Ni cosplay from the movie Monty Python and the Holy Grail. The reactions you get from the other attendees is priceless, every one shouting "NI NI NI" or the word "It". 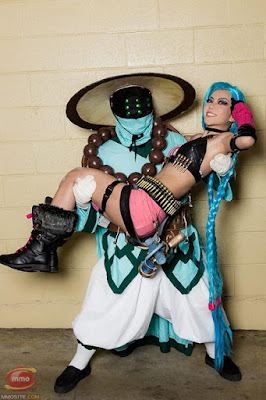 Do you have any plans for future LoL-themed outfits?

I have been thinking about cosplaying Graves from the cinematic “A New Dawn,” but I haven't gotten around to it yet.

How do you even see in that Jax mask?

I have three different Jax cosplays and each one has a different level of visibility that varies from little to none. The best way to simulate my vision with Temple Jax is by putting the front of your t-shirt over your eyes, and then add some tunnel vision to the mix by placing your hands around your eyes like hand glasses. When I made the Nemesis skin, I found a better fabric that increased my visibility by about 50%. The worst one by far was SKT Jax where I had no visibility at all, even though I had added small holes that worked when I did a test fit, they didn't work very well once I took it to a convention. I ended up modifying the mask as a visor that was attached to the cap which let me flip the mask up and down when needed.

Which are your favorite champions to play in the game?

I will have to start out with Jax since he is my main, then Graves followed by Alistar and Veigar for ARAM.

I wish I had the time to play ranked but it takes a lot of dedication and practice. I mostly play causally in between making new cosplays. I did once try to play as Jax while wearing Jax as an experiment since I was thinking about streaming on Twitch. In the end, that plan did not work out to well. Playing League was quite a challenge with just three fingers. I kept accidentally pressing Q and W at the same time and I was not able to follow the game very easily due to the lack of visibility. 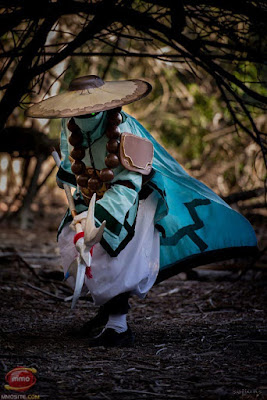 When many people think of cosplaying, the first thing that pops into their head is often sexy ladies such as Jessica Nigri and Yaya Han. Do you find that being a man makes cosplaying more difficult to get noticed?

That is very true, a lot of people do think of Jessica and Yaya first. I've even experienced this with my own family who don't understand what cosplay is even after I explain it to them. They have a perception that cosplay is all about sexy ladies. Jessica and Yaya are both very talented cosplayers and they market themselves as models, cosplayers, and actresses. As a male cosplayer, it will always be a challenge to get noticed but if I don't get noticed I don't let it get me down since in the end I'm cosplaying for fun and if you’re not having fun then it’s probably time to find a new hobby. It’s still always a great way to meet and socialize with people who share a common interest.

How long do your cosplay outfits generally take to make? Which one was the most challenging so far?

As an estimate, anywhere from two full days to about four weeks with a lot of procrastination in between or waiting for stuff to dry, cure, or to be 3D printed. I want to say the most challenging one was Nemesis Jax, specifically his weapon. Making giant, round maces are a lot more work than making swords and my first attempt was a total failure. I had to start the weapon all over but in the end I was very happy with it.

So you're also a photographer?

Yes, but I haven't been doing much photography as of late since it has become more difficult to carry my camera and equipment and cosplay at the same time. I still sometimes do shoots for friends outside the convention here and there. 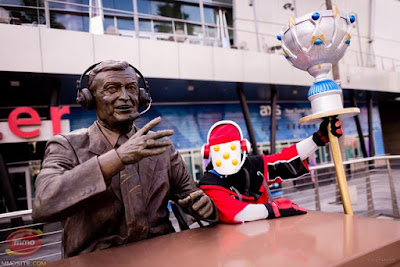 Outside of video games and cosplaying, what are some of your other hobbies?

For many more pictures, be sure to like Garp’s Facebook fan page.
Posted by Alex at 9:54 PM