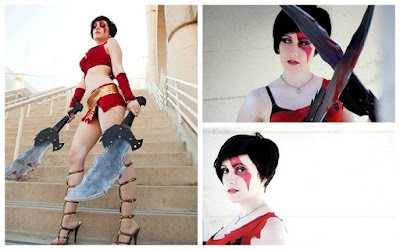 Raychul Moore is a games journalist, avid cosplayer, and true geek at heart. She has done work for sites like GamePro, EGM, GameZone, and Machinima and has cosplayed a ton of cool video game characters including a sexy female version of Kratos from God of War. I recently sat down with Raychul to talk about her work in the industry and what she thinks of the current state of games journalism.

How did you first get into the industry as a games journalist?

I was really lucky and got into it almost by accident. I have always been a gamer since I was old enough to hold a controller without drooling on it too much. But working in the game industry was never something I thought I could do. Back then, there really wasn’t “games press," you were either a developer or an animator. That’s it.

I was in college when EGM ran a little feature on me in their magazine being a chick gamer and all. Purely out of luck, GamePro saw the article and I started writing a few things here and there for them. After a bit, I was brought on to a new site GamePro was starting called GameGirl and after only a few months of writing for the site, GamePro made me Editor-in-Cheif of GameGirl and I started contributing to GamePro Magazine and website. I haven’t stopped writing about and talking about games as my career since.

Describe what a "normal" day of work is like for you.

I usually wake up around noon (I get my best work done after midnight, so I stay up way late!) and then I check all my social sites. After that, I usually get a video uploading to YouTube, pop in whatever game I am playing at the time and then after a few hours of that I usually take a break and edit another video. 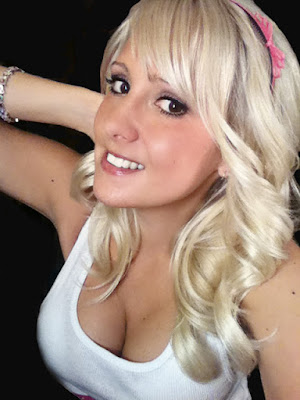 Do you think being a girl made it easier or harder for you to become successful in the industry?

Easier at first, but definitely harder in the long run. It was easy to get noticed, but very hard (and still is) to be taken seriously. People are so quick to assume that I am either a promotional model or a paid on-camera host. What they don’t know is, I have never been paid to promote a game, I play all the games I talk about and I write all my own material.

Recently you've mentioned that the games industry is sort of like a little family. Can you comment on Rab Florence's article on Eurogamer where he criticizes the cozy relationship between journalists and PR? Do you think things are too comfortable?

I agree and I disagree. It helps being sort of like a family. We all know each other and each other’s work. We get together for events and we all work well together, for the most part. There isn’t a lot of drama or rivalry. But it’s the people who don’t know how to separate business and pleasure who take things for granted and start expecting people to treat them differently.

I hate when I see press people pressure their PR friends into special treatment, or PR people who pressure press into a favorable review. That kinda behavior is damaging to the industry. But if you can separate the two and know when is fun time and when is professional time, then I think having the industry working as one big, harmonious family is what makes this industry so awesome!

You recently did a 24 hour livestream for Extra-Life. What was it like playing video games for an entire day? At what point did it become no longer fun?

It never became no longer fun... the 24 hour live stream was 24 hours of insane fun! Even those few parts where I thought I was going to die of exhaustion, I still had a great time and plan on doing it again next year! I have stayed up 24 hours for a game before, we all have, but staying up with a live chat room makes it even more exciting.

Do you ever get a chance to just play games for fun rather than for work?

Oh yes, definitely! But the great thing is, all of the games I get to cover are games I am excited about naturally! A few slip through the cracks, like right now I am working on a game that had been in my backlog for quite a while which is Deus Ex: Human Revolution. Such a great game, only wish it hadn’t taken me so long to get to it! 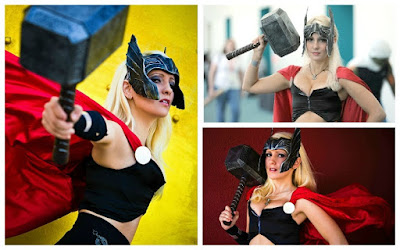 What is your current favorite game that you're playing right now?

Right not I am working on Deus Ex: Human Revolution and Assassin’s Creed 3, both are great games, but neither can top Dishonored which I just finished. Dishonored is simply amazing and is right up there with Borderlands 2 for my Game of the Year.

So you're also into cosplaying. What are some characters that you would like to cosplay in the future?

I got into cosplaying to kinda shut my friend up. :) HA! It was my first San Diego Comic-Con and one of my friends really wanted to do a cosplay group. Back then, cosplaying wasn’t cool. But she really wanted me in her group so I rolled my eyes and said fine. Who would've known, but I looooved it! I always loved dressing up in costumes before and would make up excuses for costume parties and costume photoshoots... so yeah, my love for cosplay was natural. Getting to dress up as some of my favorite characters from some of my favorite games, comics or movies is just so much fun! I love the creation, I love the concept, and I love the first time I see one of my costumes completed! 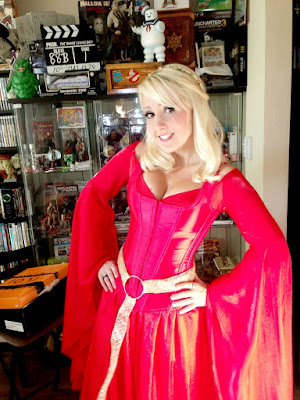 Some characters I am working on is Tiny Tina from Borderlands 2 and I would also really like to upgrade my Kratos costume.

What did you dress up as for Halloween?

I was Princess Buttercup from The Princess Bride, but with a twist. The twist being boobs. :) The dress from the movie is very very modest and I thought she needed a little extra something. ;)

Let's say you didn't work in the video game industry, what job do you think you would have?

I would probably be doing what I went to school for which was forensics and psychology. I wanted to be a profiler... but quit school to work in the game industry. I’ve never even come close to regretting that decision. :)