SuicideGirl Gamer of the Month: Yuumi 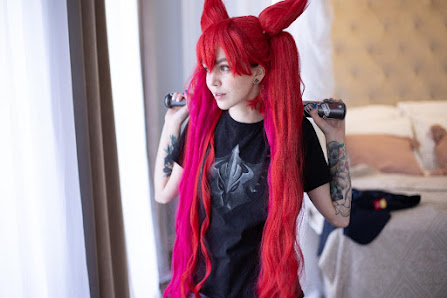 Why did you choose the name "Yuumi"?

My name is Yuumi because when I became a SuicideGirl, my main champion in League of Legends was Yuumi (now my main is Seraphine). I really liked this character for the opportunity to relax at the beginning of the game and in the absolutely incredible way to save the team in fights!

How long have you been a part of SuicideGirls? 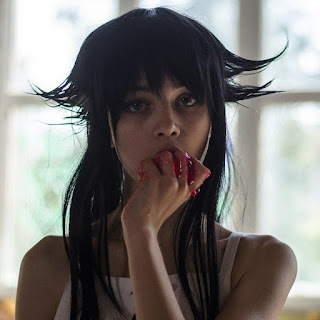 I lived in Siberia for 20 years. I later moved to Saint Petersburg because I hate having winter nine months a year. I miss friends and family though as there are 5000 kilometers between us.

I think it's the opportunity to escape from reality and be a different character and to kind of live their stories. That's why I started doing cosplay.

Which League of Legends champion do you hate playing against the most?

Hecarim. I hate it when he runs from the other end of the map and kills me which causes a sense of hopelessness.

Do you play any other MOBAs like DOTA, Smite, Heroes of the Storm? 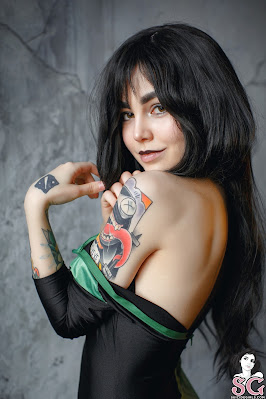 I tried to play all the popular MOBA. I played DoTA a lot before (and even got a DoTA tattoo on my arm, because this game really means a lot to me). I've made many good friends and spent a wonderful 5,000 hours on the game. I stopped playing it in 2017 due to a very toxic community and a poor reporting system, though.

Saya from the visual novel "Saya no Uta" was my first in 2012! And I love photos from this set, so cute I think! Also I did female version Lich King (Warcraft 3), Aisaka Taiga (anime ToraDora!), Kyoko Sakura (Puella Magi Madoka Magica), Shego (Kim Possible), April O'Neil and so many others I can't remember all of them!

Oh, I'll do a cosplay for Misato Katsuragi from Evangelion soon! Hope it will be great. I really love this character for her attitude towards life. After that, I want to do Aggretsuko from the series of the same name. I feel a lot like her, haha! 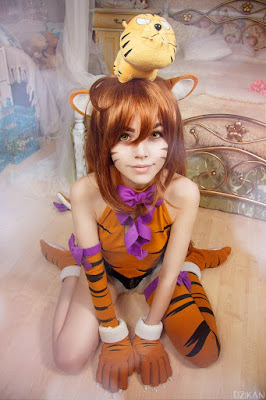 What was the most challenging or time consuming cosplay that you have done?

Lich King. I redid it from scratch twice. There was a lot of crafting and it was very interesting to make this costume.  I learned a lot of new materials and invented my own ways to create different things.

I have a lot of games! Favorite - To The Moon, Vampire: The Masquerade.

Movies - "Fight Club" and Russian film "Could One Imagine?"

Music - I listen to music mainly from the Russian underground. Of the popular artists, I really like Stromae and Marilyn Manson.

I have swords on my left hand. On my shoulder I have Ragnarok from the anime "Soul Eater" and on my forearm I have sword 2B from "Nier Automata" (Beastlord) and the Sword of War (Eater of Chaos) from Darksiders. There is also a tanto sword, Omamori charm with cat and origami from the game Heavy Rain. 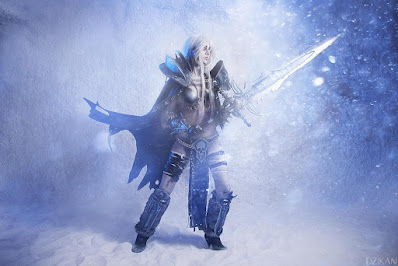 On my hip I have a tattoo with Sailor Chibi Moon of teenage rebellious age. I have two mice on my legs which are my favorite tattoos! I also have two tattoos on my buttocks, this is a heart and a smiley ":3" (I don’t know if it is used in other countries, but in Russia it is used as a cute face like in anime haha). My friends made them at a party (please don't do that!). But it was a lot of fun! Now when I see these tattoos I remember that fun time.

What is one country you would like to travel to someday and why?

I would like to visit New Zealand. In video and photos, this place looks so wonderful and interesting! I also want to visit Japan and, perhaps, someday live there for a while, to plunge into this culture, visit the cherry blossom festival and have a talk with local people (I even started learning Japanese so that I could speak once I go there!)

I have an OnlyFans with my cosplay and fanservice photos: https://onlyfans.com/yuumiunbell 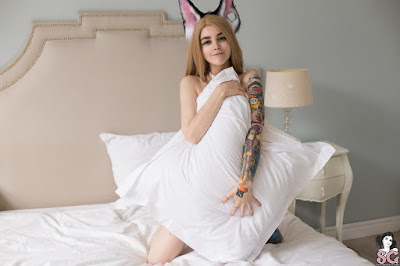 Email ThisBlogThis!Share to TwitterShare to FacebookShare to Pinterest
Labels: gamer of the month, suicidegirls, yuumi suicide