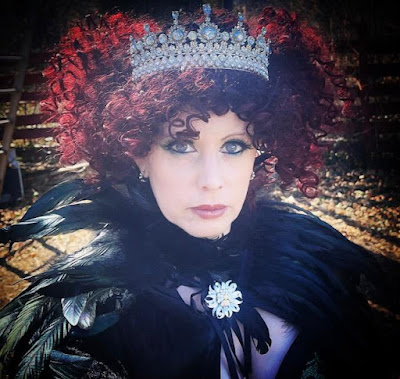 I am originally from Rochester, England but I moved to Rochester, New York to be with my husband about 20 years ago. 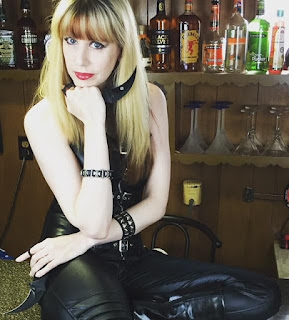 My first proper cosplay was probably for the #DressLikeADemon contest in 2016 that Lesley-Ann Brandt hosted to promote Lucifer and then I won a signed picture from her. Everything escalated from there.

I've always been fascinated with dressing up but with vlogging, and then after the Lucifer contest it kind of took on a life of its own. I've always been a bit different and cosplay really lets you explore that.

Maze from Lucifer, River Song from Doctor Who, The "Posessed" Linda from Witchboard (which is one of my personal favorites), Stahma Tarr from the TV show Defiance, Several of the characters from the new Sandman series on Netflix, Keeley Jones from Ted Lasso .... honestly there are so many, and I take requests from my fans so LOTS have stemmed from there. I showcase new ones almost every Sunday on my Melanie's Muses Facebook live show! 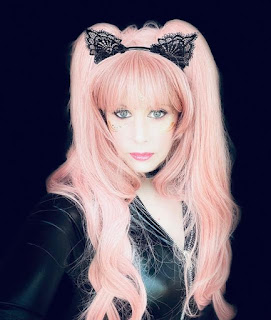 What are some of your future cosplay plans?

I am debuting a new one at FC3 which I am really excited about. It's the first one that I have had custom armor made for and relates to a new book series from Author Susan Harris. I am also working on a fan-requested Pam from True Blood (when she is cursed and half rotting).

What is the most time consuming part of creating a cosplay?

The most time consuming part is usually deciding how I want to interpret them if it’s a specific person, or what look I’m going for if it’s an original character.  Things also often then to change as I start working on them too. I usually try and pick a vibe, or with characters what I connect with about them, and then go from there.

What is your biggest cosplay pet peeve?

When people make negative comments about how the characters might not exactly match the original. If you love a character then you should go for it and interpret it YOUR way. If people don't like it they should mind their own business. Cosplay is an escape and everyone should be welcome to enjoy it! 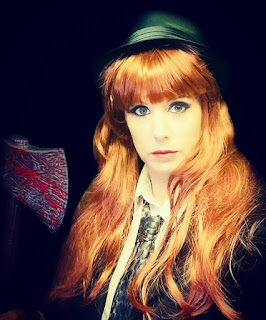 Outside of cosplay, what are some of your other hobbies?

Reading, I watch a TON of TV and weird obscure movies. Oh and collecting Funko Pops - they are literally taking over the house at this point! 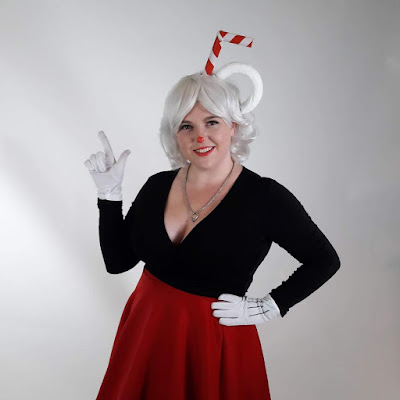 I was originally born in Cincinnati, but I moved to the East Coast when I was little. I've bounced around from place to place but I've called the Danbury area of Connecticut my home for the last few years.
How long have you been cosplaying? 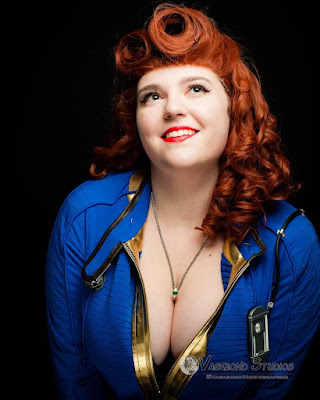 I've been cosplaying since 2012! I went to my first convention that year and I was hooked.
How did you first become interested in cosplay?
I first became interested about a month before my first convention. I had always been a huge Halloween costume fan, but my best friend had gotten tickets to New York Comic Con and invited me along with him. I knew right then and there I had to dress up - he had told me that he was going to and I should too. I was hooked from that point on.
What are some characters you have cosplayed?
There's a lot of them! I've done several versions of Belle from Beauty and the Beast; I've done my own version of Beetlejuice; a bunch of different versions of Harley Quinn (including several original versions); I've done anime characters like Lucy Heartfilia and Moka Akashiya, and most recently I added Samus Aran's Zero Suit and a new Vault Suit (from Fallout) to my line of cosplays - that's not including what I'm working on for this year's NYCC! Obviously this isn't an exhaustive list, as I have cosplays that aren't mentioned here, but I have... a lot of them!
What are some of your future cosplay plans? 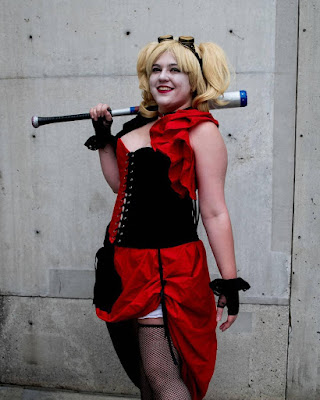 I'd love to finally get around to building Princess Aurora's dress (boy, do I have ideas for that), and I'd love to build Gideon (Diane's Sacred Treasure) from the Seven Deadly Sins anime. If you know me at all, you know that I (legitimately) have a seven page, single spaced list of cosplays I want to do! The list continuously grows, too, so... maybe I'll get to the end one day.
What is your biggest cosplay pet peeve?
I have two: the first is when people say that they made an item when they commissioned it, especially when they're competing, and the second is when people say that cosplayers "aren't real cosplayers" because they purchase or thrift their cosplays. Cosplay is cosplay! If you have a cosplay, congratulations, you're a cosplayer.
Favorite movie? Video game? TV show? Band?
Rapid fire answers: Beetlejuice/The Princess Bride, the entire Fallout series of video games (most likely, if I had to pick a favorite, it would be Fallout: New Vegas), Seinfeld, and All Time Low. 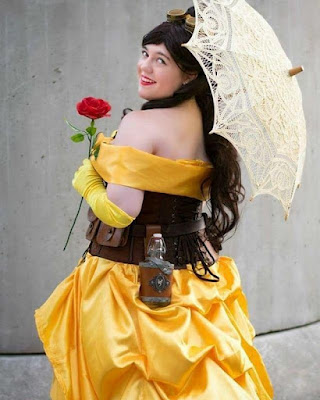 Outside of cosplay, what are some of your other hobbies?
I actually have a minor in musical theatre, so when I'm not crafting, I sing and watch musicals. I also love to collect fan art and collectible statues, and I like reading comics and graphic novels when I can get my hands on them.
Most of the time I choose to craft though - it's the one thing that I can do and shut out the rest of the world. I run an Etsy shop (outside of my regular, mundane job), so if I'm not crafting for cosplay, I'm crafting for that.
Where can fans find more of you?
Facebook: https://www.facebook.com/harleynoxcosplay
Instagram: https://www.instagram.com/harleynoxcosplay/
Twitter: https://twitter.com/harley_nox
Posted by Alex at 8:33 PM No comments:

Today we are looking at Khainsaw.

Enjoy this gallery of 16 amazing images. 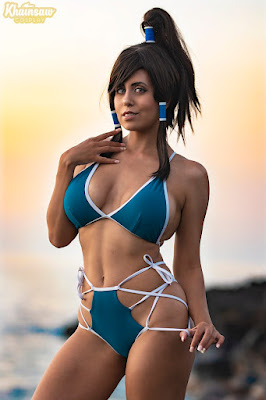 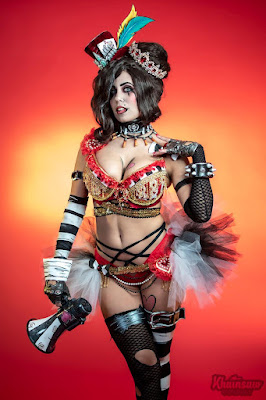 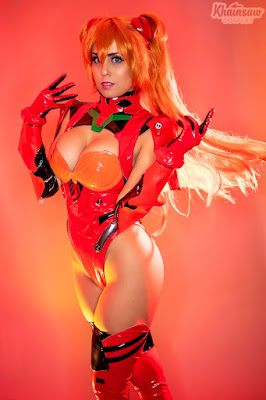 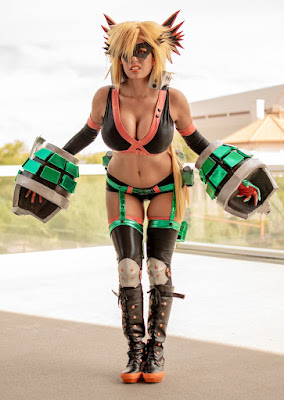 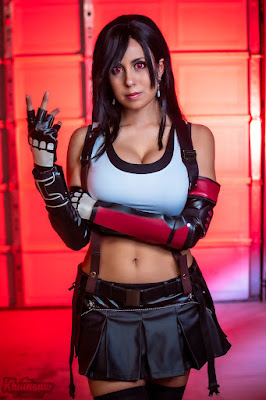 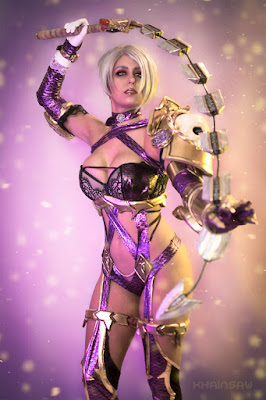 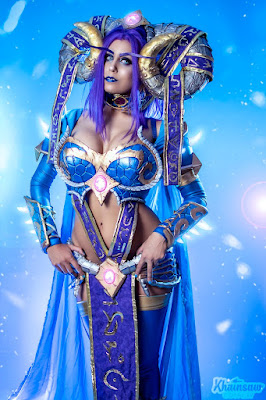 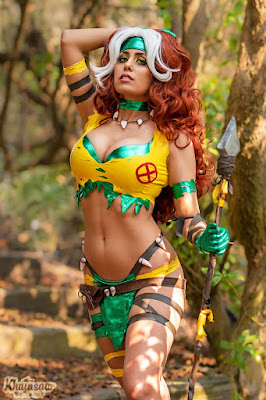 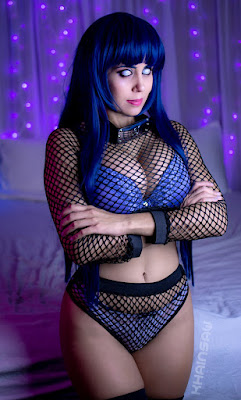 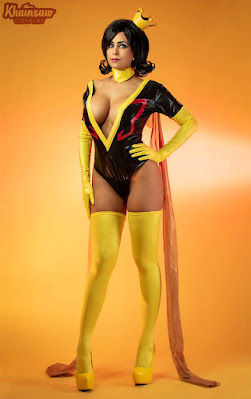 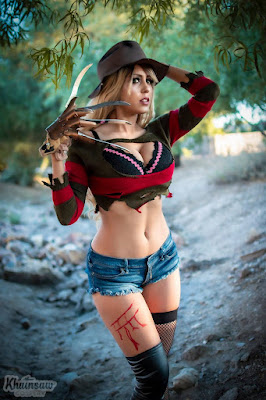 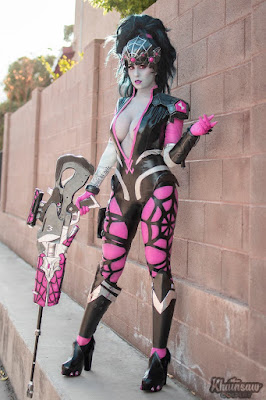 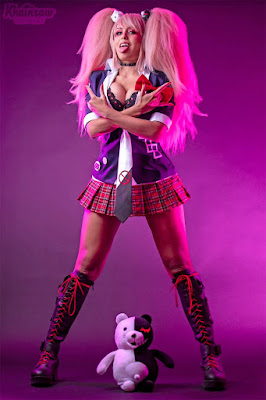 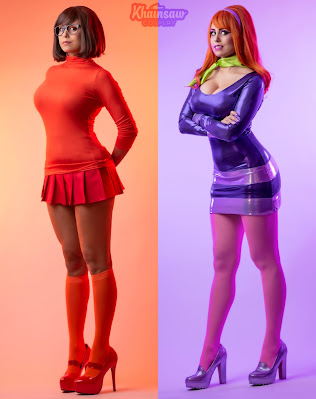 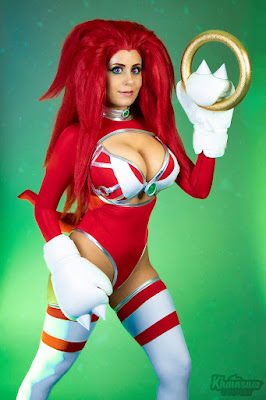 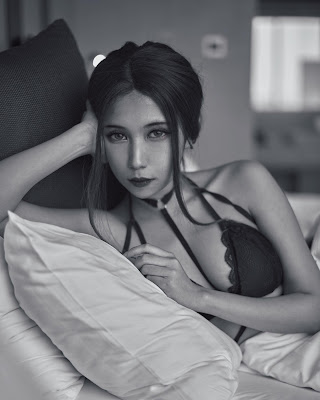