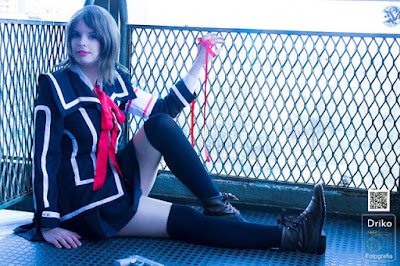 This week’s Cosplay Spotlight features Pam’s Snow Stage, an up and coming cosplayer whose popularity has been growing recently. Her page has recently eclipsed three thousand likes and four thousand is already within sight. I sat down with her to talk about cosplaying and video games.

I started to cosplay in 2006. I was 16 years old, so young and full of dreams. For me be your favorite characters was so nice and has been an awesome experience from the first time. 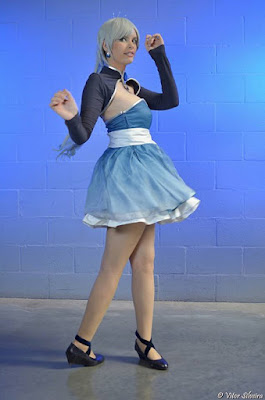 What does “Pam's Snow Stage” mean? Can you explain the meaning behind the name?

Well, my page's name meaning is that I always wanted a good name for my page, nothing like just "my name plus cosplay," and I saw some other cosplayers that used a name that means a place like "wardrobe" or "land.”

But this was a difficult task, because it had to be an original name. So, “Snow Stage” because I always do blue characters or characters with some relationship to the ice and snow. Then “Stage” because a stage is a place where people show off their abilities like dancing, singing, or whatever. My page is the place where I showcase my works for the community and so “Stage” seemed like a good name.

Jinx. I love to play her and love her personality; she's so lively and cheerful! (and also pretty crazy hahaha).

So far I have only cosplayed as Teemo.

I am planning to do Firecracker Jinx because it is my favorite skin of hers. But I also want to do Sweetheart Sona and someone from the Star Guardians. 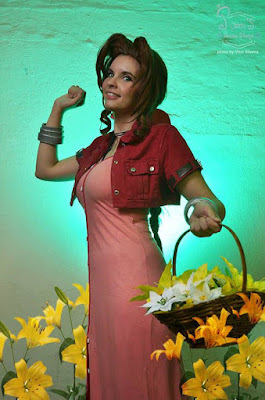 I love Final Fantasy, Chrono Cross, and lots of games from Square Enix. I am huge fan of Legend of Zelda and recently I have been playing a lot of Overwatch.

What do you think about the upcoming Final Fantasy VII remake? Are you excited for it, or skeptical of it?

I am very excited about it! Final Fantasy is one of my favorite video game franchises and the VII was one of my favorites as a kid. I played all the spin offs that I could (like Crisis Core and Dirge of Cerberus) and to see this game getting remade like that is awesome and I am very happy to be alive to see that.

Who is one LoL character you think is under-represented in the cosplay community?

I actually think all characters are very well represented, League of Legends is very popular among cosplayers and even the craziest and difficult characters have been cosplayed.

Does it ever snow in Brazil?

Yes! I live in southern Brazil and sometimes it is very cold here. It snows quite often in some cities near where I live (like the city of Gramado). The snow though is different from other countries; it isn't soft and the flakes are very tiny, not a lot like in others countries.

Is there a big cosplay/convention scene down there? 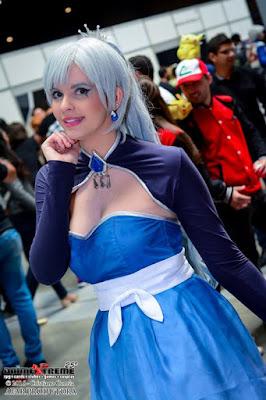 Yes, here in Brazil we have some of the best cosplayers in the world. World Cosplay Summit is very big here and we have some large contests that people from all states come to participate in. People here are very competitive and they cosplay with a lot of materials that we don’t normally use. It’s a very dedicated scene!

Well video games and cosplay take me a lot of time and dedication, so it is just those two hobbies that I have.

I would thank you for the opportunity.  If someone wants to know more about me or see my other cosplays, please visit my Facebook page.

Cosplay is a beautiful hobby and we always have a duty to make it stay safe. Be kind to everyone and encourage more people to enter into the cosplay world. That is how it will grow as a hobby and become even better.

And that's it. A big kiss for everybody!

For more images visit her Facebook page.
Posted by Alex at 10:15 PM No comments: 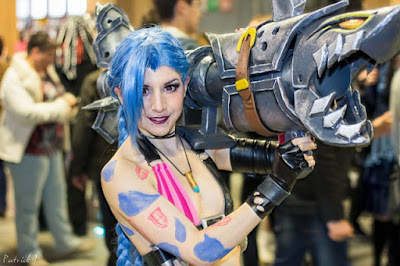 MMOsite recently had the chance to sit down with Cosplay Lullabie & Props, a Canadian gamer and cosplayer that is into League of Legends. She explains her passion for cosplay and also teaches us how to trash talk to a noob in French. 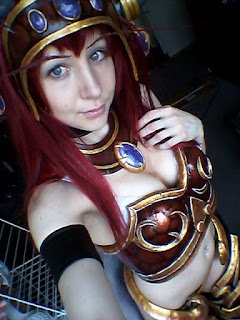 The first time I got into cosplay was when I was planning to go see a French friend from France who told me the Japan Expo was coming during the summer. I managed to throw together some simple outfits I and really loved this first experience with cosplay.

The only one I’ve cosplayed, for now, is Jinx. She is absolutely adorable and of course crazy, which is amusing. Her appearance isn't something we see very often in games, so she caught my eye immediately.

Yes, I do! I am planning to cosplay Katarina in her classic skin, as I'm a lover of original characters. Some new skins are beautiful, but in my opinion classics are the best. 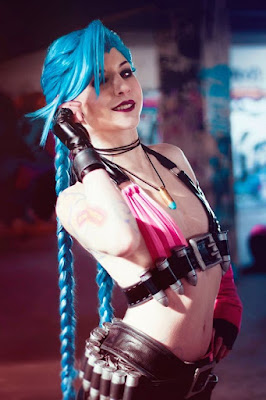 My favorite video games are honestly Zelda from Nintendo, being a fan of this series since I was seven years old. Same with World of Warcraft. I’ve been playing that since I was six years old. Then, I also got into Overwatch recently!

What's the easiest cosplay you've ever made?

So, the easiest cosplay I have made was Ritsuka from Loveless when I started cosplaying in 2013. It was to be with a friend, this way we could make a duo.

How would one say "get owned noob" in French?

Honestly, I'm not even sure what this expression means haha, but a noob is for us, if I am right, someone playing badly in video games or doing foolish things to annoy people.

I do not want to say it wrong, but maybe noob would be something like “Espèce d'incompétant, de nul!”

In a neutral way! 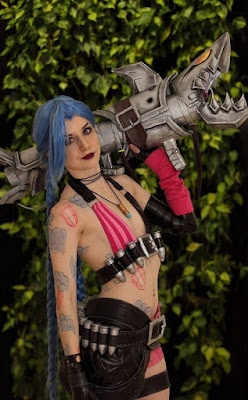 My first hobby is drawing. I’ve loved to draw characters since I was just one year old! Crafting things is another hobby of mine, even outside of cosplay. Making stuff for Halloween, Christmas, etc.

What is your favorite cosplay memory since you started cosplaying?

Favorite moment would definitively be when I got a fan of Jinx all excited behind her prints-selling table at Otakuthon when she said we looked like characters straight out of the game, haha! (Me as Jinx and my best friend as Ashe), then I received a very pretty Jinx poster from her!

Last thing I would say is that I really hope to bring more characters to life to the best of my abilities in cosplay and to not let people saying you can't! I'm still improving my costumes skills since 2013. 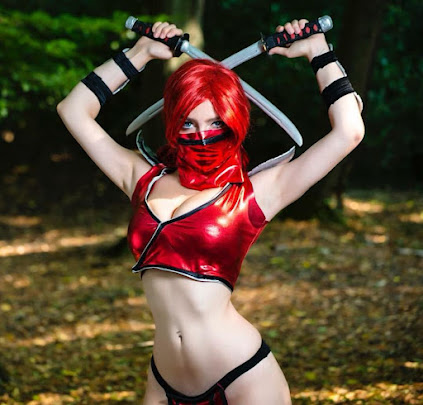