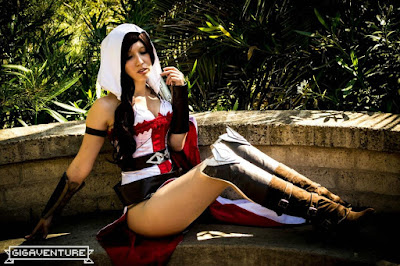 Angelica Dawn is a true nerd at heart and an amazingly talented cosplayer. She is a beautiful girl that loves a wide assortment of both video games and anime. What more could a guy ask for? I sat down with her to ask about cosplaying as a hobby and what some of her favorite games and anime are.

So how did you first get into cosplaying?

I’ve been playing dress up since I was a little girl so when I went to a comic convention and found out it was acceptable for me to do full out costumes without looking like a crazy person who just escaped the asylum, I was totally on board!

Tell me about some the characters you have cosplayed.

I love Ezio’s story in Assassin’s Creed. I love the story and game so much I even have an Assassin's Creed tattoo! When I played Brotherhood, I kept thinking about how awesome it would be to be an assassin, what skills I would have, things like that. So pretty much I was inspired to create my own character.

I have to bring up this costume because it was the first cosplay I made. I definitely took baby steps in cosplay creation. I remember reading Bleach and loving cute little Nel. Then when she transformed into her true form and showed off her awesome skills, I totally wanted to cosplay her!

Before the movie came out, I already had the costume done. I was so stoked for this story to come out on the big screen! I loved it! It was a total girl power movie, but it was also a thinker movie. I would love to be any of the female characters in this movie, but I fit the character of Babydoll best. It was to the point where people thought I was the actual girl from the movie at Comic Con. I guess I did my job of portraying the character well. SUCCESS!

Those are just a few of the cosplays I’ve done. I do a range of characters and costumes from games, books, TV shows, anime, comic books, movies, and historical eras. 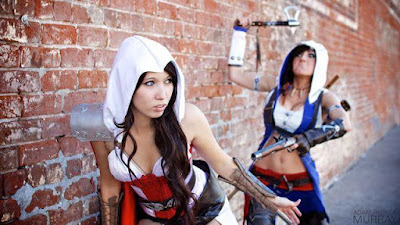 Samurai Champloo still holds my number one spot. It might not be the longest, but I love the art and the story. Cowboy Bebop is my second favorite anime, I love the characters and story, but the art is a bit old fashioned. As for my number three favorite, I’d have to say FLCL, for characters and humor.
I do watch your typical popular anime like Naruto and Bleach, though I get annoyed with their length and repetitive story arcs.

What about video games?

Obviously Assassin’s Creed holds a special place in my heart and on my gaming shelf. I promise I like other games, though! I like a game with great characters and above all a great story. The Metal Gear games, L.A. Noire, Batman: Arkham Asylum as well as Batman: , Skyrim, Kingdom Hearts, and Silent Hill 2 all hold a special spot on my video game shelf. They’re like my “top shelf” games.

On average, how long does it take you to create a costume and can you describe the step-by-step process of creating one?

I get asked this question a lot, but I never have a really accurate answer. It’s usually a lot of broken up hours that add up to about a day or two. It usually starts with me drawing out the costume so I understand what I will need to create it before I get started. Then I go hunting for all the materials I’ll need. Then 20 Red Bulls and a stack of DVD’s later my costume is all done!
Usually what gets me to get my butt in gear and get it all done is procrastination and to work under pressure. 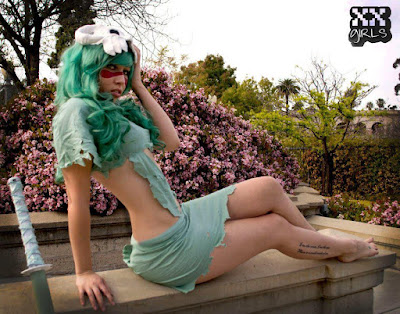 What is your secret to staying in such great shape?

I actually just do what I feel are normal things. I eat till my tummy is content, I run or workout when I feel squishy or lazy, and not eating three hours before bedtime is a big help. I also found that seeing photos of yourself is helpful in telling when you’ve gained weight. Then lastly, being surrounded by my beautiful friends is very inspirational.

Do you have a favorite convention? 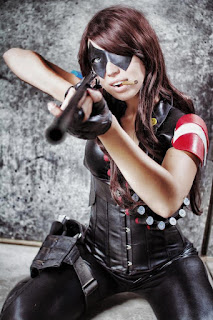 So far I’d have to say San Diego Comic Con. I actually haven’t been to a lot of different conventions, but SDCC is by far my favorite. It’s just one being nerd fest and it takes place is one of my favorite cities.

If you could liken yourself in real life to one of the characters you have cosplayed who would it be and why?

Without hesitation or doubt I have to say my Female Assassin. Though she’s not an official character, she’s my creation. I would love in the future to actually write out her story to share. I just have to find time.

I’m always planning future cosplays, I might actually just be addicted. I just recently premiered a pinup Harley Quinn at Amazing Arizona Comic Con with the XX girls. It was inspired by fan art I found online. We all did DC characters.

In AZ we also have our Renaissance Festival comic up, so for that I will have a few costumes. One being an original cosplay from Skyrim’s The Dark Brotherhood. Other than that I’m not sure what else the year will have in store, but I have a lot of ideas!